How to get to Tenerife

How to get to Tenerife

How to get to Tenerife?

Spain, as well as its island part, is a popular holiday destination among Russians and Europeans due to its comfortable climate, well-developed infrastructure and a large selection of housing of various price categories. The most convenient accommodation option is renting apartments in Tenerife, as vacationers are offered a lot of entertainment and high-quality beaches.

What transport is better to get to Tenerife?

The choice of a vehicle for a trip to the island may depend on various factors: the traveler’s budget, his state of health, availability of time. The most popular and convenient way to get to Tenerife today is air travel, since the island is at a sufficient distance from the mainland. Many airlines make regular flights to both the southern part of the island and the northern. In summer and winter, it is possible to get charter flights. Airlines offer flights with transfers in European cities, often this saves on ticket costs. The main resort towns of the airports are connected by bus, you can also order a taxi or rent a car at the airport.

Those who want to save money combine air travel with buses and trains, as in Spain there is high-quality transport connection. Minsk is considered to be a convenient connecting city for Russians, since Belarus does not require a visa, and buses leave for many cities in Europe from here.

There is no direct railway connection between Russia and Spain, but it is possible to get by train to Madrid or Barcelona from the Baltic countries or Paris. Then the tourist can fly by plane to the southern airport of Tenerife or take the express train to the city of Cadiz. The ferry from the port to Tenerife departs several times a week and the journey time will be two days. This type of movement can also be used when traveling by car. The second ferry leaves the port of Huelva and takes travelers to the capital of Tenerife – Santa Cruz. The ferry service is also suitable for those who plan to buy an apartment in Tenerife or have already purchased it, since this type of transport can carry things.

Category: Airports in Tenerife, Apartments for rent in Tenerife
Share 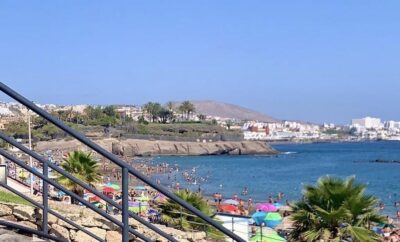 Apartments for rent in Tener...
Are you interested in renting apartments in Tenerife? Contact our agency, and a team of professionals will pick you the best accommodation with ocean views. ...
Jun 12, 2020 , 0